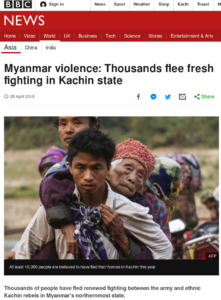 Thousands of people have fled renewed fighting between the army and ethnic Kachin rebels in Myanmar’s northernmost state.

Some 4,000 people have been driven from their homes since early April, according to the UN.

It comes as a longstanding conflict between the Kachin Independence Organisation (KIO) and government troops escalates.

The military is said to be pounding the rebels with airstrikes and artillery.

As well as the thousands displaced, there are fears that many people remain trapped in conflict-stricken areas, near the border with China. Aid organisations have urged the government to allow them access.

Myanmar profile
Tales of horror from Myanmar
„Our biggest concern is for the safety of civilians – including pregnant women, the elderly, small children and people with disabilities,“ Mark Cutts, the head of the UN’s Office for the Coordination of Humanitarian Affairs (OCHA), told AFP news agency.

„We must ensure that these people are protected.“…